For many weeks now our drain opposite my studio has been stopped up, and we haven’t done a thing to fix it.  With the possibility of rain this winter, I think we’d better get to it before we have a rainy winter, and are unable to work on it.

I’m certain  it’s  filled with just about everything you could think of from grass clippings from when we actually had grass, to dirt, roots, and anything in between. So finally my husband Les decided he would attempt to unclog it.  Fortunately for me, I’m unable to help, but I can ask questions, tell them what to do, and take pictures.  It is certain that neither my husband, nor my son appreciates me as a backseat driver, not to mention taking pictures while they spend hours trying to unclog this drain!

My son Chris, and Les have worked for several days, and they have opened it enough to get a trickle.  I had to remind them that a trickle wasn’t enough.   They just gave me that look!  Grass that had molded, and mud that had turned to concrete are not easily dislodged, but the show must go on! 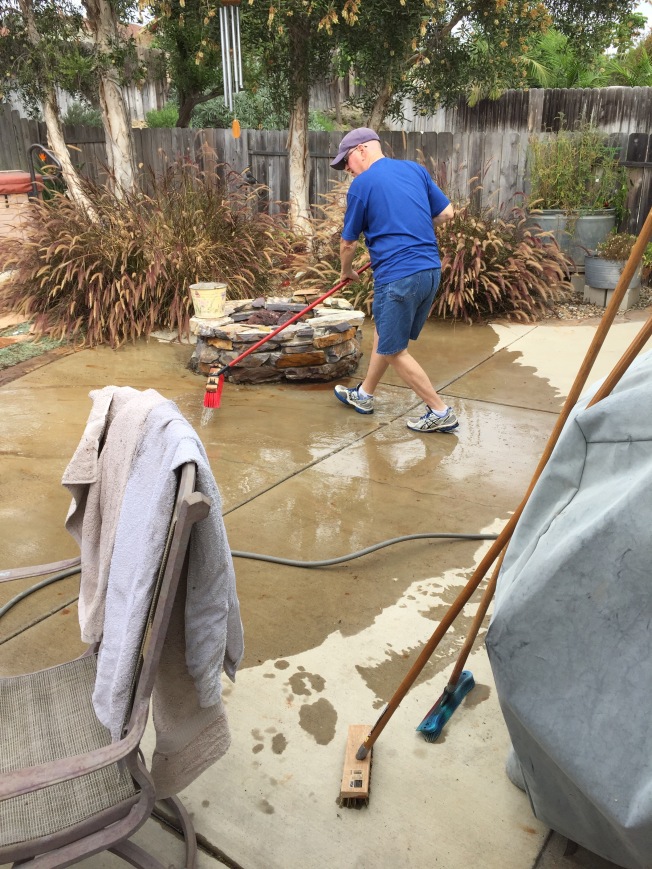 I try to stay away, but how else can I possibly supervise if I’m out of sight?  So every once in a while, I can’t help myself, I have to check on them making sure they are working up to my specifications.  They don’t always do it my way…….

We have two main drains in the back yard, and when they are open and running perfectly, we don’t have any problems. However, when one is stopped up, and it is always the same drain,  the entire patio fills with water, and doesn’t drain for days.  It most likely dries up, and doesn’t  really drain at all!  Then if we have multiple rain storms, we will be in real trouble.

How much longer will this go on?  Only time will tell.  Les wants to hire the “Drain cleaner man.”  But mama wants to DIY!  Every time I hire someone to fix something, they never do it right, so why not learn a new skill set?  Clearly Les and I have different opinions about this.  Many years ago when I was able to do more strenuous products, I would have worked on that drain until I fixed it,(and I would fix it) but today I’m unable to do this, and have to rely on others.  If my son-in-law weren’t working so many hours, I know he would be here in a minute and clear the drain.  He has many times helped us out…..happily.  I have the best son-in-law in the world.  But he is working now and doesn’t have much down time, so I don’t dare ask him to fix it.

Who will fix the drain……Les and Chris, or an unknown person who will charge us in excess of $200.  I could do a lot with that money.