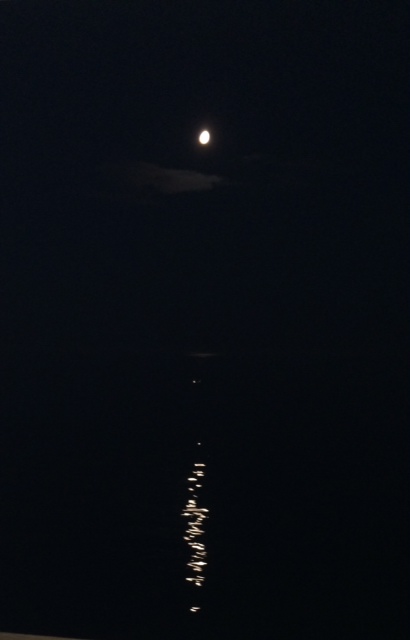 Full Moon on the Russian Sea

After our ship left Finland, we cruised all night to get to St Petersburg Russia.  During the night I awoke to a  cabin filled with moonlight.  As I got up to investigate, I realized this in part was because we had been leaving the sliding door to our balcony open all the night for fresh sea air, and because we had a full moon!  I was so in awe when I realized the beauty of this  full moon on the Baltic Sea of glass, that I quickly  scrambled for my iPhone to take a picture.

Admittedly, you had to be there, but I thought it was so beautiful.  So much so that, I had to hold myself back from waking up my husband just to  show him.  Isn’t this breathtaking?

Our entire cruise was like this, barely a ripple on the Sea, so much so that my husband, Les didn’t even wear his sea-sick patches, or his wrist bands the last day as our ship was cruising back to Stockholm.  This was our fourth cruise, and the most calm sailing of all four.