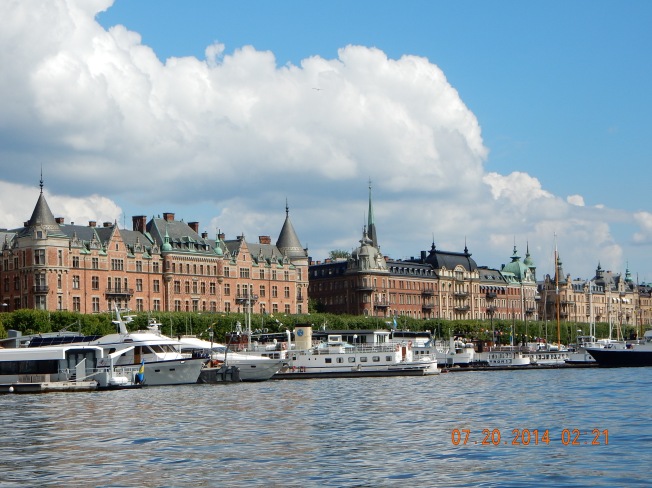 This story is the beginning of our vacation to Sweden, and the Baltic Sea…

We are now on the plane, & squeezed in like sardines. I’m comfortable, and  compact as I stifle my phobia of small, tight spaces!

Looking around at all the different people, with different dialects, & different ways of dressing, I’m fascinated by how they control their children, & how they interact with others. 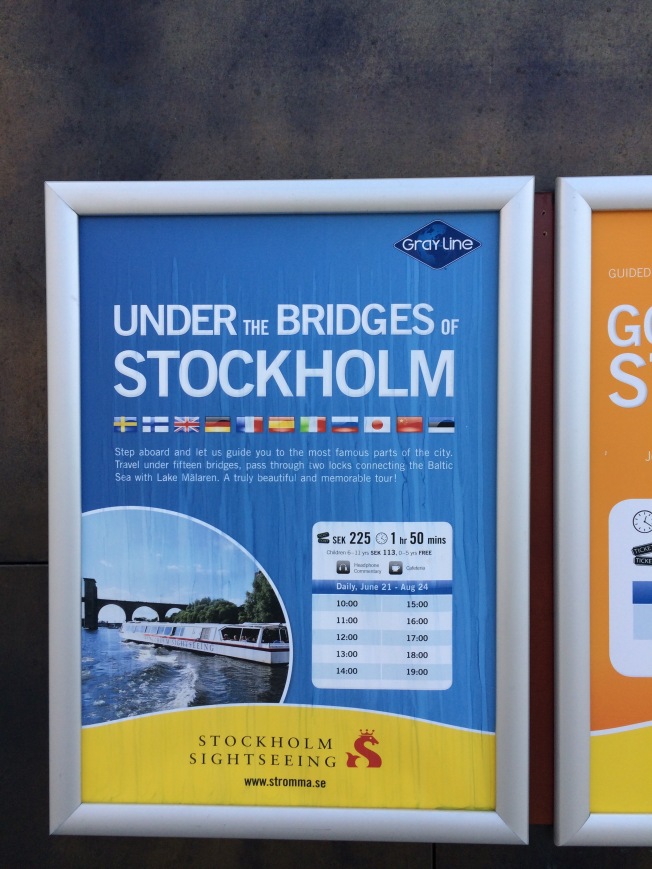 Flying out of LAX International is so much more interesting than the smaller airports. I love watching people anyway, but people from a different country, with different languages is most interesting!
Everyone is scurrying around working at finding their seats, and stowing away all the carry-ons.

As the plane is beginning to ready for take off, announcements are made along with instructions for crash landings  in several different languages.  (Yippi)

We find ourselves in a 747 double-decker.. Certainly all the 1st class seats must be upstairs!  For as large a plane as this is, one would think there would be slightly more room for each passenger. 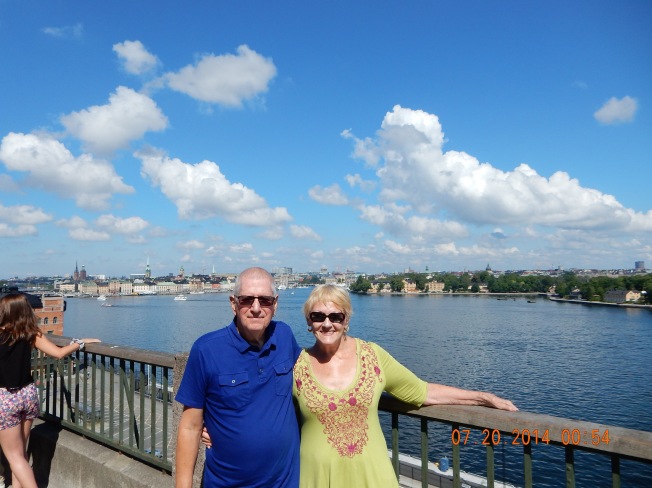 Earlier, prior to boarding we noticed the crew coming down the middle of the airport heading for our plane, dragging their luggage behind – there had to have been at least two dozen crew members. It was quite impressive seeing them prance, and strut as if they were on a runway, and this being  a competition! Walking straight, & tall – never making eye contact with anyone, and all had their best faces on. Clearly it would have been a difficult pick amongst the beautiful people!

With the passengers  settled, and  seatbelts on,  we have taken off, our plane is  now cruising at a comfortable  altitude, and  only 9100+ miles to Amsterdam. Only a hop away! 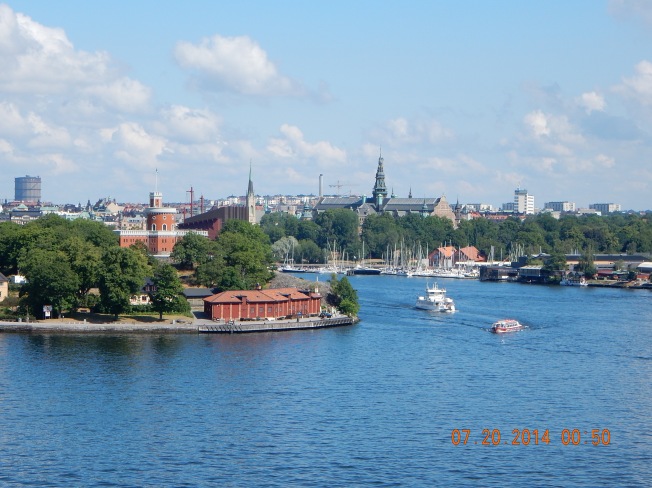 The man next to me tells me he is a musician, and  is traveling with his loyal companion, his cello. He clearly doesn’t like flying, because while I ordered an apple juice, he started the flight with a double vodka! 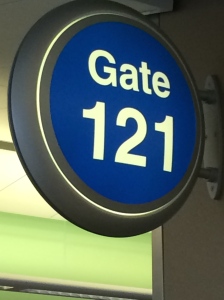 This is where it all started!

How many of you get home from a vacation, and find yourselves totally worn out?  This was certainly the case with us.  After all, we went to a most unexpected place, and we wanted to get the most out of this adventure as possible.

Each and every day on our cruise we booked shore excursions.  The first day we were scheduled to take a Shore Excursion in Helsinki, Finland, the tour was cancelled for lack of interest.  Really…..lack of interest?  All the other excursions that were offered, had been fully booked.

Not actually.  After traveling an entire day to get to Stockholm, so we could board our ship, both of us were exhausted, so a cancellation although disappointing, was not the worst thing that could happen to us.

What was the worst thing?

The worst thing was after landing in Amsterdam, and waiting a little over an hour to board our flight to Stockholm……just as we were getting ready to step onto the ramp to the plane, we were flagged to the side and told we could not take our luggage onto the plane!   What?  Apparently one of the airport attendants decided our carry-on, together with  our backpack was too much.  As we tried to sort all that out, many people before, and after us were walking onto the plane with as much or more, and not  a word was said.   The airport staff  spoke perfect english, however there didn’t seem to be any way we could resolve our problem  with them.  After going through security,  and screening, this one person had made his decision, and that was that.  We were told to pick one – the roll-on or the backpack, but not both.  I don’t have to tell you the contents in both of those items are things you do not want lost, and are imperative to have them with you.  Since our backpacks had all our money, we said we’d take our backpacks with us.

As it turned out that was a choice I’d come to regret.  Of course they promised us these bags would be on the plane, and at the terminal when we arrived in Stockholm.  Of Course!  But, as it turned out they weren’t on the plane, nor at the terminal when we collected our luggage.  As it turned out, they didn’t know where our luggage was.  All I could think of was how do I even begin to replace these items while in a foreign country?  My husbands electric razor, all our medication,  all my makeup,  all the cords to my camera, iPad, and computer were in my carry-on.  I had shoes, art supplies for journaling, a few pieces of jewelry, and my new blow-dryer that I never should have taken in the first place – for just this reason.  It sounds silly, but I started grieving for  my my own personal creature comforts.    How can I replace my blow dryer that my daughter gave me for my birthday, or the handmade necklace that my friend Cathy made, and make-up, I couldn’t even imagine not having any makeup on a trip…any trip.

It was difficult, but finally I told my husband,  how difficult I knew this was for him, as well as it was for me, but since we couldn’t do anything about it, lets please not talk about it!  We both agreed to make the best of it, and not discuss it.

We arrived in Stockholm a day before boarding the ship, so immediately we had the Hotel start tracking our luggage, and they did a great job.  They sat on the phone with the airport for long lengths of time in an effort to track them down.   Nothing seemed to help.  The airport would say they had one, but not the other on time, the next conversation, both were missing.  It was difficult to know exactly who to believe.  Sunday evening when we boarded the ship, we received a message that if the airport couldn’t get our luggage to us before we reached St. Petersburg, we’d have to wait until Estonia.  Of course, I wouldn’t want my luggage delivered to Russia.

Just so  we didn’t waste our time in Finland, we decided to take a Hop On- Hop Off bus to town, and check 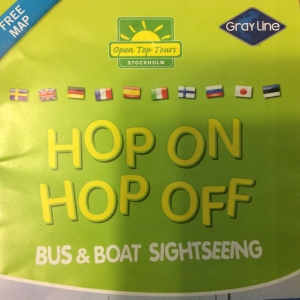 out Helsinki ourselves.  We really didn’t get to see much of this modern town, only what we could see by walking, but enough to realize that Finland is progressive in both their architecture, and merchandise.  We purchased a few necessities like toothbrushes, toothpaste, shower jel, and just to help us feel less lost, a couple of shower scrunchies.  Those few things were enough to help us start getting  back on track.

Really, they couldn’t have put more effort into returning our luggage to us?

Estonia was four-days out, and I’m guessing my makeup wouldn’t reach me before I took the land excursion for that day.  Once again, we had to let it go, or chance ruining our cruise.  Also, I haven’t mentioned that we were traveling with friends, and they certainly were sympathetic, but I’m sure didn’t want to continually hear about the major screw up – even one more time.  So again, we had to stop talking about it!

After touring around  Tallinn, Estonia for seven hours, and dragging ourselves back to the ship hot, sunburnt, & exhausted, I open the cabin door only to find our luggage sitting by the bed just waiting to greet us. What an unexpected surprise.  To be honest, I never thought we’d  see our luggage again.  This restores my faith in humanity for sure, and somewhat restores it in airports in general!

That evening I showered, put on just a little makeup, and went to join our friends, and traveling companions for a lovely dinner in the dinning room.  The topics of discussion was varied, but not before we exhausted all accounts of our missing luggage.  Thank heavens, we don’t have to beat that dead horse any longer!