Since it’s been a very long time since I’ve blogged, I thought It would be a good time for an update.

Much has been happening since I’ve last posted.  I’ve fallen in and out of love with art…several times. I still love art, but so much has gone on, and my studio looks like a storage unit, I’ve lost inspiration.  I know, me loosing inspiration!   YES..ME.

Generally during the last three months of the year my art takes a seat on the sidelines.  I’m usually focusing on the holidays, and what to buy for each of my kids, and grandkids.  It takes a lot of thought, and planning, sometimes even going in on a larger gift for one or the other grandchild.  It is so much easier when the grandkids are smaller.  It was easier when my own kids were smaller.  As many of you know all too well, the older they get, the more broke we get!  I’m not complaining, just stating a fact.

After the holidays it takes me a few months to recuperate, and get back to normal.  (I’m using the term Normal very lightly). Art slowly works it’s way into my life again, and I’m up and running.  2019 that didn’t happen.  Just about the first of March, my oldest son got sick.  We thought he had the flu, so I got him 7up, and soup, and foods that you usually can get down when fighting the flu.  After three or four days I went over to his home, and found him very sick, very weak, and not getting any better.  My husband and I threw him in the car and I took him to emergency.

After they looked at him, he was admitted to Intensive Care, and that’s where a very nasty journey started.  He had what’s commonly known as flesh eating bacteria.  He spent two months in the hospital fighting for his life,  and a year later he is still rehabilitating.  Needless to say, my art took as back seat.  Ok with me,  my son lived when the doctors said it would be a miracle..

To regress only a few years.   Since I was about four years old I’ve seen spirits.  The funny thing is, I was never frightened, nor did I think it was unusual.   I actually thought everyone saw spirits or ghosts as I called them at the time.  I’m a strong empath, again I thought everyone was the same.  But I would get extremely annoyed when people would act clueless, or had no idea what I was thinking, or talking about. Now I realize, we don’t all have the same skills, nor do we all want them.

Over the years my experiences have been numerous, and again I thought everyone had the same kind of experiences.  Boy was I wrong.  My poor husbands!  Yes husbands!  I’m now married to my third husband, and bless his heart, he’s so understanding and loving. He has never thought anything about my interesting life.  We fell in love, and ten months later…we married.  He bought me a new home shortly before we married, and twenty nine years later here we are, still married, and still happy!

Over the last year and a half I’ve been focusing on my gift, and working at sharpening my mediumship skills.  If you can’t beat it, join it!  Since I haven’t been inspired to paint, I am inspired to speak with spirits.  I am finding it so rewarding bringing messages to people that are depressed or in pain due to their loss.  Messages from spirits can ease that pain, and allow them to process their grief.

For many years I’ve looked for someone to mentor me, and help me understand what I now call a gift.  More recently I was invited to have lunch with a friend. She was meeting a few of her friends, and she thought I might enjoy having lunch with them. It was in that bunch of her friends that I met a “real live medium.”    I have looked for someone like her for many years, and never was able to find someone to mentor me.  Here she was sitting right in front of me.  Best yet, she was so personable, and I immediately loved her. We hit it off, and she agreed to see me later that week.  This was the beginning of a relationship that is strong, and loving to this day.

Since then, I have found a couple other mentors, and I work with all three for different parts of mediumship.  They each give their gift with love and compassion, and I have grown as a medium, and am still learning.

My purpose in telling my story is in part to explain why I haven’t been painting, and in part letting you know I will never stop doing art in some way.  Now I’m going to focus on publishing uplifting affirmations along with a little art.

My focus in this difficult time is to always be a beacon of light to anyone needing uplifting.  We are all feeling caged in during the lock down of 2020.  Our world most likely won’t be the same, and all of us will need to do a little reinventing.  Some are more depressed than others, some don’t feel so caged.  I’m doin fine, but the rest of my family feel very disconnected with life.  We still need to wear masks, and social distance, we still need to stay at home.  Things are opening up, good or bad, this is reality!

I don’t know if I’ll change the name of my blog,  I have considered it.  To what, I haven’t any idea at the moment, but I do know,  I need to do this for me, and for others.

It will be interesting to see what Stone Soup morph’s into, and I really hope you’ll stick with me.  This is my story, thank you so much for allowing me into your home, and taking time to read my blog, bless you all!   Karen

Monday is a day I rarely leave the house. Instead, I paint, create in different ways, and yes I do make my bed! It’s a wonderful day that I have by myself, and without distractions if you don’t count the cat and dog wanting attention.

Last Monday was especially joyous for me. I was feeling so much peace, and tranquility. There was Hawaiian music playing in my living room, and Brother Iz was filling my heart with sweet sounds of the Hawaiian Islands.

We are all thinking of the volcanoes, and earthquakes the big island is going through now, but that doesn’t stop my heart from loving the islands, the culture, and the incredible joy I feel when I spend time there.

A long time friend who lives on Maui once told me to take off my watch, I was on vacation and didn’t need it. He also told me to make sure I put my toes in the water as soon as I arrived on the island. That trip I did just that, and I haven’t worn a watch since. Another trip I forgot to put my toes in the water at the beginning of our vacation, and you know I just wasn’t as relaxed as I expected. On the last day of the vacation, my husband and myself went to the water’s edge, and walked in the sand and surf. It was at that moment we realized what a disservice we had done to ourselves by not taking our walk on the first day there. That will never happen again!

I started a copper painting with all the things I could gather in my studio. A few ideas I took from the “Copper Workshop ” I had completed that Richard Hawk gave. I haven’t been able to purchase the supplies needed to work like Richard taught, but I still need practice. It also helped with that itch to create at any cost. So on a crinkled copper sheet, I started a painting that is my first alone. Sometimes you just have to work with what you have.

Simple?  Yes!  But each thing we do counts even if it’s so incredibly simple.  There are some days that we aren’t feeling especially creative, but we need to do something.  This was one of those days.

As I sat with my Diva Sisters wanting to do something, but not feeling very creative, I pulled out my iPad and did a little sketch of an Orchid that had been a gift.  Somehow, I hit a key that colored the picture, and this is the end result.  I liked it, so I saved it.  It’s a reminder of how simple things can be at a time when things are a little overwhelming.

Thanks for checking in on Stone Soup.  Always feel free to leave a message, and let me know what you are thinking.

It’s been almost four  weeks since I had a knee replacement, and I’m so happy that’s over.  I didn’t say much to very many people, probably because I wasn’t looking forward to having another surgery. Now it’s over, I’m doing well,  and all I have to do is eat, create  a little art, and get my energy back!  My energy is slow to return, but my spirit is  right there thinking about  creating.

I haven’t been posting much due to my energy level,  lately I seem to like taking long naps…..  The only thing is, I believe our bodies let us know when we need rest, and when we can let go and have fun.  These days having fun is a three-hour recouperation nap!

My Grandson, Nolan made me a get well card, and one the inside it says, “I hope you like your new knee!”   Isn’t that cute, that can only come from an 8-year-old.

As I get stronger, and can create more art, you will be the first to see it.  I really can’t wait to get back to my normal schedule, get cleared for driving, go out to brunch with my girlfriends, and all the things you take for granted when there isn’t anything to show you a difference.

Thanks for stopping by and checking on Stone Soup.  See you soon……. 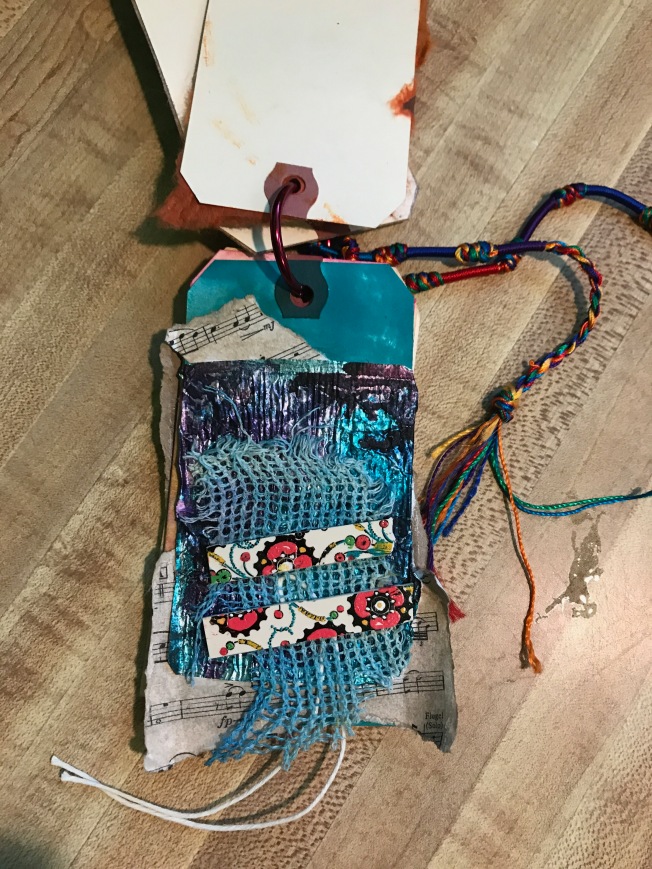 This week is considerably cooler, even the humidity isn’t so bad. The air is still on, and we are still glued to the TV, and reports of the horrendous hurricanes that are happening in the Southeast. Les and I haven’t stopped worrying about everyone since before Harvey hit Houston. Other than donating money, clothes, etc, Les and I can’t participate, or help in other ways. So we watch and listen.
Meanwhile, I need to stay busy, and my busy is usually my art. This week I’ve been working on my third Prayer Flag, and more tags.

Being a Mixed Media artist gives me an excuse to save all kinds of little things.  Bags of things know one else wants or needs, pieces of fabric, anything you can imagine somewhere in my stash of goodies….I have it.   Putting it to work is key in this process. 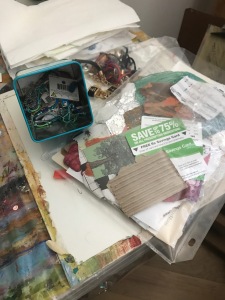